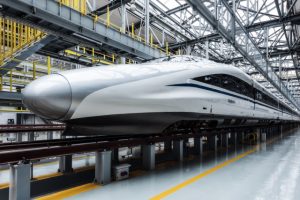 President Cyril Ramaphosa’s dreams of high-speed rail in South Africa are one step closer to being a reality as the Department of Transport fast-tracks a ‘railway renaissance’ in the country.

Speaking during a virtual standing committee on Transport on Wednesday (19 October), the department briefed parliament on the National Rail Policy Draft White Paper that outlines plans for an overhaul of the rail sector regarding both passenger and freight rail.

The department said that the planned policy will fall under the National Rail Act and aims to make rail a more affordable, competitive and effective transport mode that provides the backbone of the country’s freight logistics and passenger mobility by 2050.

A key part of the draft paper is a push to develop high-speed transit.

In 2019, during his state of the nation address, president Cyril Ramaphosa said that he dreams of a South Africa where cities are filled with skyscrapers connected by bullet trains.

“We should imagine a country where bullet trains pass through Johannesburg as they travel from here to Musina, and they stop in Buffalo City on their way from Ethekwini back here.”

“Has the time not arrived to build a new smart city founded on the technologies of the Fourth Industrial Revolution? I would like to invite South Africans to begin imagining this prospect,” Ramaphosa said at the time.

Under the new policy, the department wants to fast-track funds into rail sector investment to initiate a ‘railway renaissance’ in the country by developing high-speed and heavy haul transit.

The new policy will also, according to the department, allow for passenger/commuter lines to be commissioned where the current Passenger Rail Agency of South Africa (Prasa) can not meet demand.

Speaking on high-speed rail (HSR), the department said that it plans to provide the foundation for the prioritisation of high-speed corridors in South Africa.

Under a new HSR Framework, the department of transport says it will determine the strategic objectives that need to be considered, namely:

Within certain regions, rapid transit is also on the cards, with provincial governments now being able to develop business cases for further development of current urban transit, the transport department said.

Development into South Africa’s high-speed or higher-speed long-distance rail is promoted, according to the department, to:

To fund these plans, respective spheres of government may apply funds to rail investments to the extent they are able to, it said.

“Beyond that, as in many countries, the responsible authority may engage other interested entities to co-fund passenger services and or attract private sector participation, thereby leveraging their ability.”

Currently, only 1.1% of the working population relies on Prasa to get to work every day. The graph below shows the most popular methods of working South Africans getting to the office, according to Statistics South Africa:

You can watch the department’s presentation below (high-speed train information at 01:05).

The importance of cybersecurity in 2022 – MaltaToday