Can neobanks take on the old guard? – World Finance

Digital banks have gained momentum in the past few years amid the global turmoil caused by the pandemic. They now face regulatory headwinds as well as traditional banks catching up to the competition through acquisition or imitation
When Mariano Pennello, a 58-year-old welder from the small French town of Bédoin, deposited €22,000 in a savings account he had opened using the mobile application of the German digital bank N26, little did he know that he would be engulfed in a Kafkaesque nightmare. At four percent, the interest rate seemed attractive compared to what conventional banks offered, he says.
When he tried to withdraw the amount in April, he realised it was not possible. The firm would not respond to emails and phone calls, until his account was frozen without any explanation, while the application had been blocked. Radio silence ensued: “I don’t even know if my account has been hacked.
They won’t answer my emails,” he says. He has sent all relevant documents to the company’s headquarters in Germany and is now planning to file a complaint with the French police unit responsible for cybercrime. “If {N26} is really a bank, they should have put in place policies and staff for this type of technical problem,” Pennello says. “This is not normal.”
Banking for a new generation
Pennello is far from alone in his predicament. N26 has been facing a flurry of customer complaints over abruptly closed down accounts in several European countries. In a public statement, the firm said that this was part of a crackdown on fraudulent accounts. Many other digital banks have faced similar problems. Resolver, a UK online complaints service, reported a total of 1,850 similar complaints last year, most related to account freezing.
However, these are only teething problems for a burgeoning industry of fintech firms, known as ‘neobanks’ or ‘challenger banks,’ offering services traditionally provided by banks to retail customers. They are all committed to ‘unbundling’ the banking sector, namely picking apart its value chain and keeping the profitable bits, just like other digital disruptors have done in their sectors. Currently, there are around 400 of them worldwide, serving approximately one billion customers, with the size of the market reaching $47bn in the US (see Fig 1). Grand View Research, a market research firm, expects the global market to be worth $722bn by 2028. 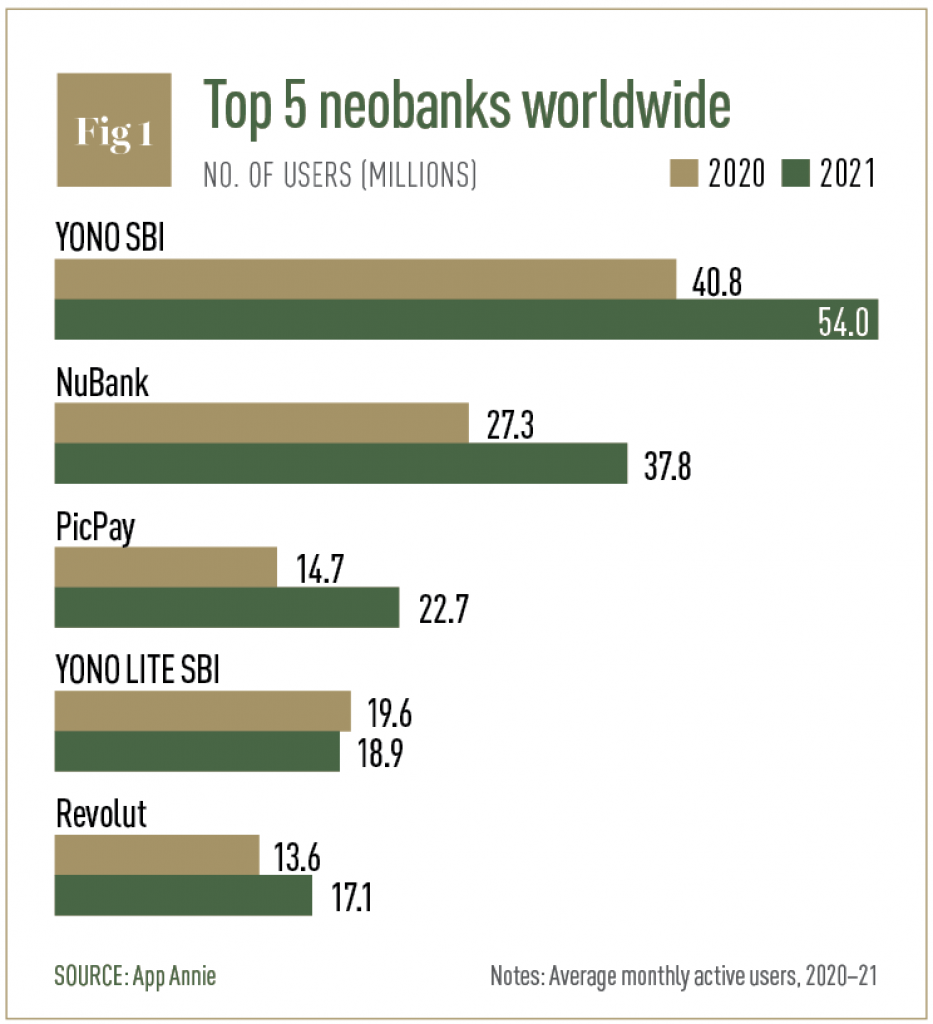 One reason for the success of challenger banks is the seamless digital experience they offer. Unlike traditional banks burdened with antiquated infrastructure, they are building their databases from scratch, which allows them to develop new services. Their speedy, bot-powered customer experience is tailored to the needs of young digital natives. And as digital-only firms, they don’t have to open costly branches, offering instead lower fees, higher interest rates, and swift sign-up processes. Another difference from legacy banks, says Dylan Lerner, a fintech analyst at Javelin Strategy & Research, a US market intelligence provider, is that they provide personalised services, rather than one-size-fits-all products. “A neobank will not give you just a credit card. They will help you build your credit,” he says. The result, Lerner argues, is that traditional banks are losing their grip on customers, with an ensuing fragmentation of their relationship with them. “For traditional banks, it’s death by 1,000 cuts,” he says.
The pandemic has accelerated this trend, pushing depositors to turn to digital banking. In the US, neobanks gained new customers by offering early access to federal stimulus checks. Eversend, a neobank tending to the needs of the African diaspora, increased its transaction volume from $800,000 in 2019 to $253m in 2021. “Lockdowns forced people to stay at home and adopt digital financial services,” says the company’s founder Stone Atwine. “It was a horrible time for humankind, but it did accelerate technological adoption.” Neobanks have also won hearts and minds by offering services that became popular during lockdowns, such as cryptocurrency trading and peer-to-peer payments, according to Dan Dolev, a fintech analyst at Mizuho Securities, a Japanese investment bank. Traditional banks are anxious to respond to these challenges. Some try to replicate the digital experience neobanks offer, providing perks such as virtual card display, speedy mobile on-boarding, digital wallets and payment-linked rewards. Some have rushed to acquire neobanks; Société Générale has acquired Shine, a neobank targeting entrepreneurs.
Others have set up their own digital-only services. Cogni, a blockchain-powered neobank, is the brainchild of Barclays’ accelerator programme. Goldman Sachs has launched Marcus Invest, offering an app-based investment banking experience. However, such experiments can be short-lived, given that digital offshoots must be incorporated into existing infrastructure. Neobanks will always have the upper hand when it comes to digital services, Dolev says: “You only need one car. If one of these neobanks takes up this role, then the old bank becomes a back-office lender,” he says, adding: “The worry is that banks become marginalised, unknown and brandless lenders.”
Emerging markets
Neobanks are particularly successful in markets where most people never had a bank account. Last December, Brazil’s Nubank became the most valuable financial firm in South America with a valuation of almost $50bn and over 50 million users, following its IPO in New York. Digital banking is the future in a region where half of the population is unbanked or underbanked, but more than seven out of 10 people own a mobile phone, says Romina Simonelli, Chief Payments Officer at Ualá, an Argentinean neobank backed by SoftBank and Tencent. The company has launched ‘Aula Ualá,’ a platform deciphering the intricacies of personal finance for the layman through downloadable material, videos and free courses.
As digital-only firms, they don’t have to open costly branches, offering instead lower fees, higher interest rates, and swift sign-up processes
Some neobanks skip developed economies altogether to focus on up-and-coming emerging markets. TymeBank, a South African neobank, has raised $110m to fund expansion into Southeast Asia. Paytm, the biggest payment service in India with over 450 million registered users, is planning to expand into credit. Firms like Eversend have revolutionised the booming remittance industry. “It is delightful to sit in Paris and send euros to my grandma in western Uganda instantly, using a single app,” says Atwine. “With traditional banks, this process takes two to five days, costs a lot more, and requires my grandma to take a trip into town for cash pickups.”
Regulatory risks
For regulators, neobanks pose a conundrum. The plethora of new players brings much-wanted competition in a sector notoriously averse to innovation.
However, their disruptive force has sparked concerns over money laundering and fraud. Last April, the UK financial regulator questioned the efficacy of the mechanisms some neobanks employ to tackle financial crime, following an increase in suspicious activity. Established banks have an advantage in this area by spending billions to monitor transactions, according to Javelin’s Lerner, while neobanks do not have the necessary infrastructure. But this could lead to more innovation, he argues, with ‘reg-tech’ start-ups helping neobanks meet their compliance needs. Rapid international expansion, as in the case of N26, has also vexed customers: “We are in Europe and I believe that the French laws should be as valid as the German laws,” says Pennello whose N26 account was frozen. “I have always been banking with French banks and never had any problems.” 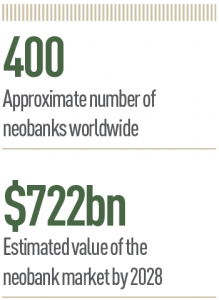 US regulators have adopted a strict approach, forcing neobanks to partner with traditional ones. Chime, the most popular US neobank, has been ordered by Californian authorities to remove the word ‘bank’ from its marketing material. Regulators may also dent their profits from debit interchange and instant deposits, Dolev predicts. In Europe, many neobanks have obtained banking licences, thus being able to expand into lending, investment and net interest margins.
The EU’s Payment Services Directive has compelled banks to open access to customer data that digital upstarts can use to develop their products. “In the US, conventional banks have greater lobbying power,” says Nathalie Janson Calamaro, a banking regulation expert who teaches at NEOMA Business School. But even in Europe, neobanks have only obtained ‘light licences’ with certain limitations; as soon as European banks sense a threat, there will be more pressure to restrain competition and effectively stifle innovation, Calamaro argues.
In search of a business model
The biggest concern over the future of neobanks is that most will never make enough money to stay afloat. Currently, just five percent of them are profitable, according to a report from Simon-Kucher & Partners. Few have been permitted to offer full-fledged credit services, the riskier but also most profitable part of the banking business, and are instead stuck with low-spending customers. In most cases, ‘freemium’ pricing models that rely on customers paying monthly subscriptions to access extra services have attracted small numbers of depositors.
Banking remains a highly localised market due to cultural and regulatory differences, unlike other sectors that saw digital pioneers rapidly expand around the globe. A case in point is the recent failure of European neobanks to break into the US market. Multinationals with big pockets may also intensify competition in the future. Telecoms powerhouse Orange and IKEA owner Ingka Group are expanding into the banking sector, while Apple and Amazon have launched payment services that may indicate bigger ambitions. Decentralised finance firms like Compound could also provide credit-hungry customers with an even fancier digital alternative than neobanks.
Neobanks face the same problems other pioneers had to tackle before becoming the new mainstream. Even the term ‘neobank’ remains controversial. Some of these digital upstarts eschew it altogether, fearful of regulatory scrutiny. Others openly embrace it, despite offering only a fraction of the services provided by traditional banks. For his part, Pennello thinks they should be treated like normal banks: “Governments and regulators should supervise them a bit better,” he says.