A –
A +
Updated At: Jul 31, 2022 05:49 AM (IST)
A video of the Minister “forcibly asking the Vice-Chancellor to lie on the bed” has been doing the rounds. Video grab: Twitter/@PargatSOfficial
Tribune News Service

Balwant Garg
Faridkot, July 30
Dr Raj Bahadur, Vice-Chancellor of Baba Farid University of Health Sciences, on Saturday sent his resignation letter to Punjab Chief Minister Bhagwant Mann.
The resignation was due to the humiliation, which Dr Raj Bahadur faced in the hands of State health minister at Guru Gobind Singh Medical College and Hospital at Faridkot on Friday.
Political leaders across the political spectrum also hit out at Jouramajra.
I believe Dr Raj Bahadur has resigned as Vc unable to bear gross humiliation by the illiterate Health Minister! If @BhagwantMann has an iota of decency he should immediately dismiss Mr Jauramajra from his cabinet and ask him to tender an unconditional apology to Dr Raj Bahadur.

Health Minister Chetan Singh Jouramajra was caught in a tight spot after he asked Dr Raj Bahadur to lie on a “dirty” patient’s bed at Guru Gobind Singh Medical College and Hospital here on Friday.
A video of the Minister “forcibly asking the Vice-Chancellor to lie on the bed” has been doing the rounds.
The Minister can be “heard speaking rudely” with the Vice-Chancellor over the lack of cleanliness in the medical college.
Secretary to VC also resigns
Indian Ortho Association condemned the incident of humiliation to the VC.  OP Chaudhary, secretary to vice-chancellor, also submitted his resignation.
PCMSA condemns unceremonious treatment to VC
The PCMS Association has strongly condemned the unceremonious treatment meted out to the BFUHS VC by the Health Minister.
The PCMSA State President Dr Akhil Sarin said, “The PCMSA strongly condemns the unceremonious treatment meted out to the VC by the HM. Whatever the reason, the way the VC was maltreated, is deplorable. Such blatant disrespect for a senior health functionary is appalling, to say the least. The face-off has actually led to the State losing its only Spine Surgeon”. 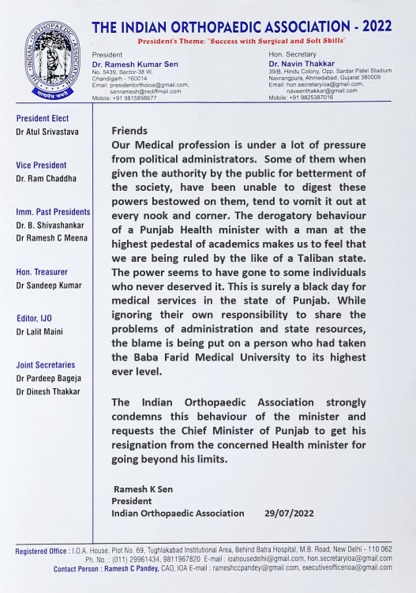 Punjab CM Bhagwant Mann apologises to Dr Raj Bahadur for health minister's rude behaviour, requests him to stay on
A –
A +
SUBSCRIBE TO OUR NEWSLETTER
One attack occurred at a minority habitation in Chadoora in …
Launches attack against nepotism and graft; seeks collective…
Says Congress will oppose attempts to put leaders like Gandh…
Chandrashekhar Harbola was part of a 20-member troop that wa…
Bano, who was five months pregnant at that time, was gang-ra…
View All

The Tribune, now published from Chandigarh, started publication on February 2, 1881, in Lahore (now in Pakistan). It was started by Sardar Dyal Singh Majithia, a public-spirited philanthropist, and is run by a trust comprising four eminent persons as trustees.
The Tribune, the largest selling English daily in North India, publishes news and views without any bias or prejudice of any kind. Restraint and moderation, rather than agitational language and partisanship, are the hallmarks of the paper. It is an independent newspaper in the real sense of the term.
The Tribune has two sister publications, Punjabi Tribune (in Punjabi) and Dainik Tribune (in Hindi).
Remembering Sardar Dyal Singh Majithia
Designed and Developed by: Grazitti Interactive