Finney (Thames), a shy but clever 13-year-old boy, is abducted by a sadistic killer (Hawke) and trapped in a soundproof basement where screaming is of little use. When a disconnected phone on the wall begins to ring, Finney discovers that he can hear the voices of the killer’s previous victims. And they are dead set on making sure that what happened to them doesn’t happen to Finney. The film is produced by Derrickson & Cargill’s Crooked Highway and presented by Universal and Blumhouse.
For in-depth thoughts on The Black Phone, please see my colleague Dom Fisher’s review from its original theatrical release here.

Video Quality
The Black Phone arrives on Blu-Ray courtesy of Universal Studios Home Entertainment with a terrific AVC encoded 1080p transfer in 2.39:1. The film has a dour, slightly desaturated color palette that encapsulates the mood of this era. There are not many chances for colors to pop off the screen, but there are a few elements that really impress with the depth to its appearance. Skin tones appear natural across the entire cast with even the most minor facial details on display, especially when gory effects begin to come into play. Black levels are appropriately deep and give way to a solid amount of detail in shadows. The white levels do not fall victim to any blooming in this presentation. The level of detail in this presentation is pretty fantastic even with the intentionally hazy cinematography. The Super 8 flashbacks have less depth as the format dictates, but still looks great in high definition. There are no egregious instances of aliasing or compression artifacts detectable here. While we would have loved a 4K UHD Blu-Ray for this one, this Blu-Ray is a great time as Universal continues its steady work releasing quality transfers.
Audio Quality
The DTS-HD Master Audio 7.1 track is extremely effective, and it never fails to deliver something truly unsettling. The soundscape constructed here is very rich with a nuanced design from beginning to end. Dialogue comes through crisp and clear with none of the information feeling lost to any competing sound effects. All of these effects have a precise sense of direction within the mix with certain moments designed to jolt you out of your seat. The movie uses environmental sounds to great effect, and the track retains strong detail even when the action escalates. This film is largely situated in character-based moments, but the film springs to life when it makes sense which packs a substantial punch. The soundtrack and score underscore the story perfectly and flow out with flawless fidelity. The track is a flawless representation of the film. 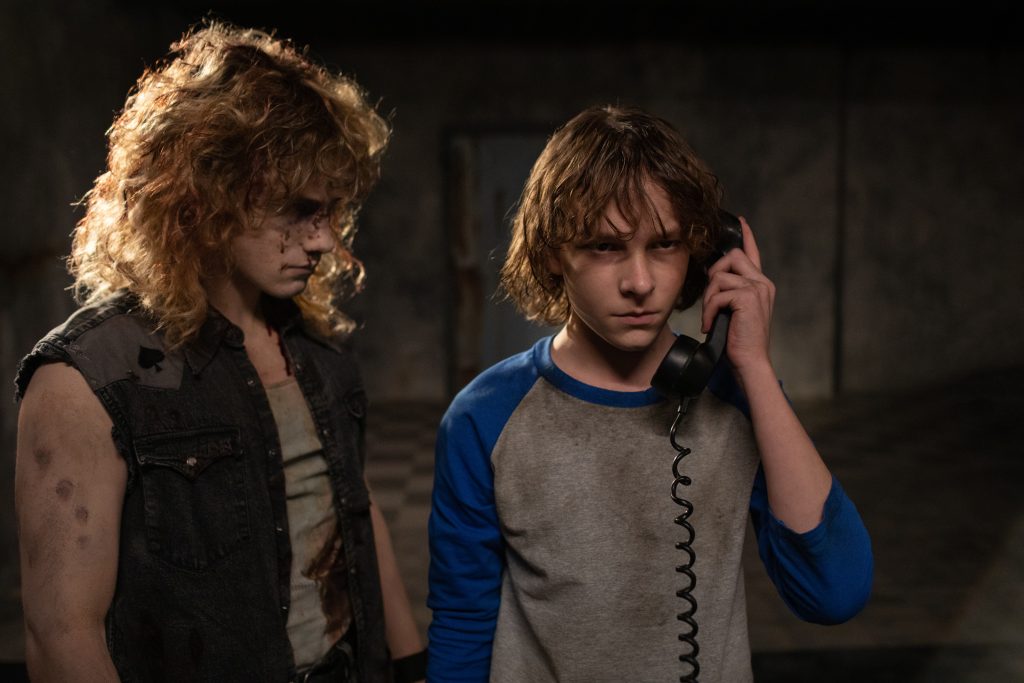 Final Thoughts
The Black Phone is a not the film that all horror fans may want, but it is a supremely tense, paranormal-tinged murder tale that sticks with you after the credits have finished rolling. Ethan Hawke is the standout with his villainous portrayal which you crave more of, but is made more effective by his scarcity. Story and character development takes precedence over gore, but the film offers up enough thrills to satisfy the casual genre audience. Universal Pictures Home Entertainment has released a Blu-Ray with a stellar A/V presentation and a handful of great special features. While we bemoan the lack of a 4K UHD Blu-Ray option, this is a film well worth adding to your collection. Recommended
The Black Phone is currently available to purchase on Blu-Ray, DVD and Digital.
Note: Images presented in this review are not reflective of the image quality of the Blu-Ray.
Disclaimer: Universal Pictures Home Entertainment has supplied a copy of this disc free of charge for review purposes. All opinions in this review are the honest reactions of the author.
Dillon is most comfortable sitting around in a theatre all day watching both big budget and independent movies.
Type above and press Enter to search. Press Esc to cancel.