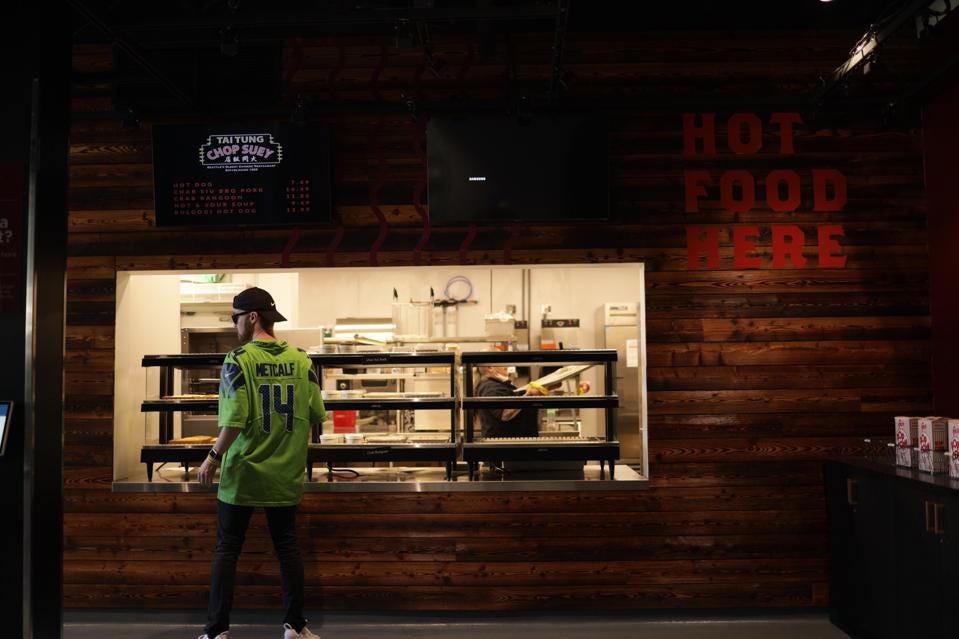 The District Market concession location on the upper concourse of Lumen Field in Seattle saw a 74% … [+] increase in throughput since adding Amazon’s Just Walk Out technology.
The Seattle Seahawks tested out Amazon’s AMZN AMZN Just Walk Out and Amazon One technologies this season in one upper-concourse location at Lumen Field. The results proved so promising the Seahawks now plan to debut three additional locations on the main concourse when the team plays at home again on Sunday, Nov. 27, the largest expansion of the technology in sports.
“We look at Lumen Field, which turned 20 years in July of this year, and look at these fan innovation opportunities and partnerships, like with Amazon, as critical to progress fan experience at the stadium,” says Zach Hensley, Seahawks’ vice-president of operations and general manager of Lumen Field. “Our goal is to get fans back in the seats as quick as possible. These technology solutions serve that option best for us.”
Lumen Field’s upper concourse had two traditional concession stands in the venue’s tightest concourse. Over 51% of fans stay on the upper concourse throughout the game. To start the 2022-23 season, the Seahawks partnered with Amazon to improve the fan experience and boost revenue by turning those locations into a District Market store featuring Just Walk Out and Amazon One technologies.
The District Market concept at Seattle’s Lumen Field will expand with three new locations on the … [+] main concourse Nov. 27.
The results impressed. The site saw a 74% increase in customer throughput when compared to the previous traditional belly-up concession stand in the same location and total transactions per game doubled compared to the previous design.
“We are an experience building where people want to see the game,” Hensley says. “We want to get people back to their seat as quickly as possible.”
The Seahawks worked with Amazon to mine data from around the stadium and offer a mix of grab-and-go options in the frictionless technology store. The site was already known for the team’s community concession program that featured items from the local Chinatown International District, so the Seahawks didn’t change the entire menu, simply taking influence from Amazon. The result was more customers moving through, a less congested concourse and twice as many sales, with the most popular food item sold the Bulgogi Hot Dog, a footlong dog topped with pork bulgogi, pickled cucumbers, gochujang chili aioli and nori.
Now comes the expansion.
The three new technology-driven additions replace more traditional kiosks on the main concourse at sections 103, 105 and 123. “We looked at traffic flow into areas,” Hensley says, “not only flow, but increase of variety.”
The Bulgogi Hot Dog is the most popular item in Seattle’s current District Market location, which … [+] features Amazon’s Just Walk Out and Amazon One technologies.
The set-up of the new stands features different coolers, allowing for an increase of alcoholic and nonalcoholic beverages by as much as 30%. The dry snack options, which stood at one or two selections per stand, can now increase to six to eight differing products.
The modular units, still dubbed District Market, offer a different setup than the original installation on the upper concourse, so will not serve hot items. By replacing the small counters of the traditional belly-up stands with District Market designs, Hensley says the Seahawks now have the footprint to increase product variety while improving throughput and not hampering speed of service.
“We are advancing from the one large store in the main concourse of stadiums and are starting to work with customers on leveraging the technology more broadly, particularly in the upper levels of stadiums which are historically underserved in terms of speed and technology,” says Jon Jenkins, vice-president of Amazon’s Just Walk Out, about continued expansion.
Two format types have emerged, whether larger grab-and-go markets, key flagships around the venue, or, as in the case of the Seattle expansion, the smaller prefabricated “store kits” with a lean footprint to “serve as line busters throughout the concourse.”
The District Market at Luman Field in Seattle, home of the NFL’s Seahawks.
“These are particularly effective on busy gamedays because they reduce congestion, keep fans moving in and out of stores quickly and they ensure fans don’t miss any key moments of the action they’ve come to see,” Jenkins says. While most teams have offered pre-packaged items, whether snacks or canned beverages, he says the technology also supports the sale of hot foods and tap-poured beverages.
Hensley says that as more data streams in on fan behavior the Seahawks will decide on how far they go with the grab-and-go District Market versus the traditional food and beverage service. “I do think there will be a blend because people come to sporting events to see the sports, but also for the food and beverage experience,” he says. “There will always need to be a blend.”
Amazon has its technology in all three of Seattle’s professional sports venues, along with UBS Arena in New York, TD Garden in Boston, Texas A&M’s Kyle Field, Minute Maid Park in Houston, Chicago’s United Center, Charlotte’s Bank of America Stadium and Crypto.com Arena in Los Angeles. Jenkins says increased revenue and throughput at the venues translates to increased customer satisfaction.
The three new stands in Seattle all come enabled with both the Just Walk Out and the Amazon One technologies. Additional Amazon One sign-up stations will be positioned on the concourse, but fans still have the option for a dip-and-pay credit card experience typical at a Just Walk Out technology-enabled store.
As the new stands get up and running, the Seahawks can continue to look at the data and then use the flexibility of the layout to adjust menu options. The variety available in the new stands allows the team to keep staples in play and rotate other items, even seasonally. “As the seasons change, from summer to fall to winter, there are opportunities to change (the products),” Hensley says. “It gives us a great amount of flexibility to transition menu items.”

Cardinals bet on their young core by not trading for Juan Soto, here's why it could pay off for St. Louis – CBS Sports