Lucy Sante on Writing with the Back Brain – Literary Hub

The following first appeared in Lit Hub’s The Craft of Writing newsletter—sign up here.
At a literary festival a few years ago, during question time after a panel discussion, an audience member told me, “You’re one of those intuitive writers,” stepping hard on the adjective. Aren’t we all intuitive? was my first thought, but then I realized that no, many writers are procedural or mimetic or discursive. They are  raconteurs or reporters or haranguers or intellectuals. They employ front-brain operations to render a story or an idea into words, translating straight across from one to the other. Intuitive writers, by contrast, do not quite know where they are going.
A lot of my writing is basically this: I have a strong but complicated emotion about something. I couldn’t easily explain it in conversation. It is a capacious emotion, rife with anomalies and ambiguities and internal contradictions, wrapped around a teeming anthill of sensations. To make sense of it in writing I have to methodically break it down into its constituent parts, until I have identified every significant facet of that emotion. Then, with the patient splayed on the operating table and all its organs numbered, hitherto unsuspected patterns will begin to emerge. This process is something I first realized when I was film critic for a monthly, so that I’d see maybe forty movies a month, but could only write about one or two. I discovered that the most interesting pictures to write about weren’t the ones I loved or the ones I hated, but the ones that caused strong unresolved emotions that I would have to work out on the page. Which is to say that the writing would not be descriptive of a thought process but would manifest the thought process in itself.
Going into the writing I like to cultivate a particular juncture between knowing and not knowing—having all the facts but remaining uncertain how they fit together. It’s a delicate balance, because if you know too little what you write will be halting and opaque, and if you know too much it will be dead on the page, a mere transcription after the fact. In any case, whatever ideas and speculations may occupy the writer’s head, writing does not begin with an idea; it begins with a sentence. What occurs in your mind is a great swirling mass of half-formed notions, which are interwoven with worries, memories, songs, and emotions; the signal-to-noise ratio is overwhelming. Putting the thought in writing crystalizes it and gives it life.
Once graphically represented thus, the flaws will be immediately apparent: the inconsistencies, the repetitions, the holes, the blather. Editing begins with the first sentence, since you cannot proceed to the next without securing the first. (It sometimes takes me a very long time to advance between sentences, but I’ve seldom done more than one draft.) Editing and writing walk together, and they both require the eye and the ear. That first sense alerts you to run-ons, overlaps, problems of logic; the second to the music, which is a lot more than decor. Writing to George Sand in 1876, Gustave Flaubert formulated a credo for prose writers:
When I come upon a bad assonance or a repetition in my sentences, I’m sure I’m floundering in the false. By searching I find the proper expression, which is always the only one, and which is also harmonious.
There are two ideas at work here. One of them is the concept of the mot juste, the right word. There are really very few true synonyms; words are highly individuated. “Hate” and “scorn” and “despise” and “execrate” all mean roughly the same thing, but not exactly; only one of them will work in any specific context. The second idea is harder to explain or defend than it is to practice: that the musicality of a phrase is a key to its truth. Flaubert goes on:
Is there not, in this precise fitting-together of parts, something eternal, like a principle? If not, why should there be a relation between the right word and the musical word? Or why should the greatest compression of thought always result in a line of poetry?
Writing requires the use of the whole mind, both its sober, logical, sequential half and its savage twin: unconscious, instinctive, libidinal, maybe extrasensory. You can write something perfectly decent with only the use of the first, but without the second you will never achieve transcendence.
Nineteen Reservoirs began with a desire to write about the place where I’ve lived for the last 22 years, found its narrative structure in the construction of the New York City reservoirs, discovered its moral pivot in the competing claims of city and country, was populated by newspaper accounts–since the lockdown prevented my use of archives and museums. All of these were the result of chance operations, and stemmed from a strong initial emotion. I could not have known the result beforehand.
__________________________________ 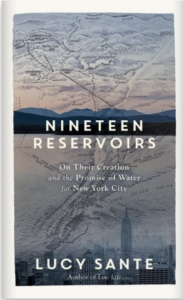 Nineteen Reservoirs: On Their Creation and the Promise of Water for New York City by Lucy Sante, illustrated by Tim Davis, is available via The Experiment.
Created by Grove Atlantic and Electric Literature